Every two years, the Coupe d’Europe de Montgolfières (Hot Air Balloon European Cup) in takes place in South Charente, where brightly coloured hot air balloons from a dozen countries come to meet. Don’t miss the next Cup which will take place from the 4th to the 7th of August 2022. It’s the perfect opportunity to take to the skies in a hot air balloon!

A ballet of hot air balloons in Charente

The Coupe d’Europe de Montgolfières, a world-renowned hot air balloon competition, is held in Mainfonds and Aubeville in South Charente every two years, and is quite the spectacle! For five days, around 50 hot air balloonists will meet for this extraordinary event, alongside a second competition: The Women’s World Cup. These two events are the only events in France to be recognised and accredited by the Fédération Aéronautique Internationale! 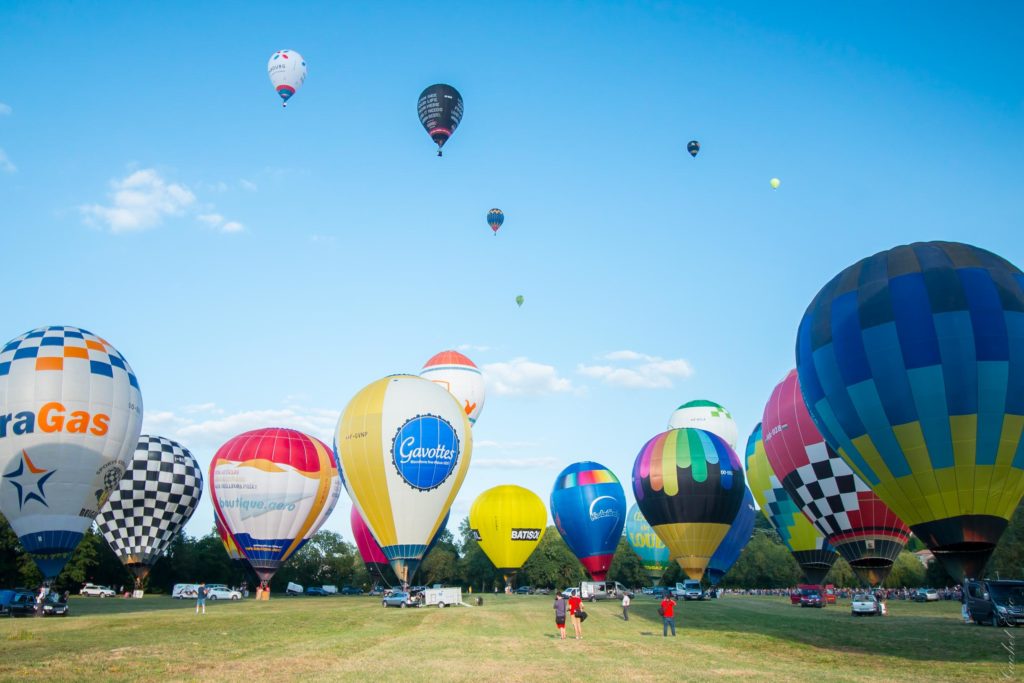 Soar in a hot air balloon in Mainfonds. Outside of the sporting competition, there will be first flights in hot air balloons for the audience, an air display with collector plans and aerobatics, a Charentais-style meal and a cabaret evening with fireworks.

Every day, the teams will take off from a different site, wowing the thousands of spectators gathered around the launch area. A sea of multichromatic balloons will colour the skies of Charente, sailing above Les Deux Charentes.

The thrill of a first flight in a hot air balloon

Although ’fiesta flights’ are very popular and sometimes booked well in advance, we were lucky enough to find two places for a first hot air balloon ride during the 21st European Cup in 2019. We met early in the morning, at 6:45 a.m., in a meadow in Sireuil, a pretty and picturesque village nestled between the winding banks of the river Charente.

However, before climbing into the basket with our pilot and his crew member, we helped them unfurl the balloon’s gigantic envelope. The nylon material reminded me of a sailboat spinnaker. The envelope was stretched out in the direction of the wind and attached to the basket and the burner with large carabiners. The pilot blew cold air into the balloon, the burner heated it up, the balloon rose and as if by magic, the machine rose as well! It was 7:45 a.m., so we climbed on board, under the muffled sound of the burners, ready to set off!

As we rose, we saw locals waving to us from their gardens. We continued to ascend and we flew over the Charente countryside which was bathed in the orange-pink light of the rising sun. The panorama was magnificent, dominated by shades of green from the vineyards and cornfields. We set off in direction of Mosnac, Simeux and then Châteauneuf with a light east wind. We flew over the Charente River several times. I tilted my head to admire the reflection of the balloon in the river before we veered off over the groves.

The pilot told me the flight speed: between 3 and 13 km/h. The aircraft moved smoothly with the wind and allowed us to fully enjoy this magical moment, as if we were travelling beyond time. Then came the moment to end this floating dream, 80 minutes of unforgettable flying!

Our landing in the middle of a cut wheat field was a success, but it was only the beginning of the adventure. There were still four days left to join in with the rest of the festivities and to continue watching the myriad of balloons flying over the Charente landscape!