This impressive, 20 m high monolithic church carved into rock is the crown jewel of Aubeterre-sur-Dronne!

This small town in South Charente, a stop on the Way of St. James and one of the ‘Plus Beaux Villages de France’, takes its names from Alba Terra (white earth), because of the chalky, white massif on which it’s found.

An invisible church with mind-boggling dimensions

When you arrive in Aubeterre,  what is most impressive is the whiteness of the chalky cliffs that take over the landscape. There’s no bell here to help you find the church.

Yet, Église d’Aubeterre is known for its immense dimensions: 27 metres long, 16 metres wide and 20 metres high!

But where is it hiding?

It was built at the bottom of the town, on a rocky overhang which is found just as you enter Saint-Jean-d’Aubeterre. From the outside, it’s invisible. There’s no historic gate or radiating chapel. You can’t go around it – it’s well hidden! As it was carved into a cliff, its entrance looks more like a prehistoric cave that one might see in neighbouring Périgord. Vegetation covers part of the chalky and bright side of the wall, inside of which, you’ll see the mysterious cave church.

An unique monument build in the cave

Various excavations have made it possible to retrace the history of this unusual site. At the beginning, it was a mere cave which housed a pagan cult.
Then, at the zenith of the Roman period, two monumental sanctuaries were built in Aubeterre: The underground church of Saint-Jean, in the foothills of the village and the church of Saint-Jacques, in traditional Saintonge style, located on the hills of the town.

At the beginning of the 12th century, Pierre de Castillon, Viscount of Aubeterre, had this place of worship dug out just below the medieval castle, whose entrance tower dominates over the valley. In the past, it was connected directly to the castle by means of an internal corridor, which is now, however, blocked. 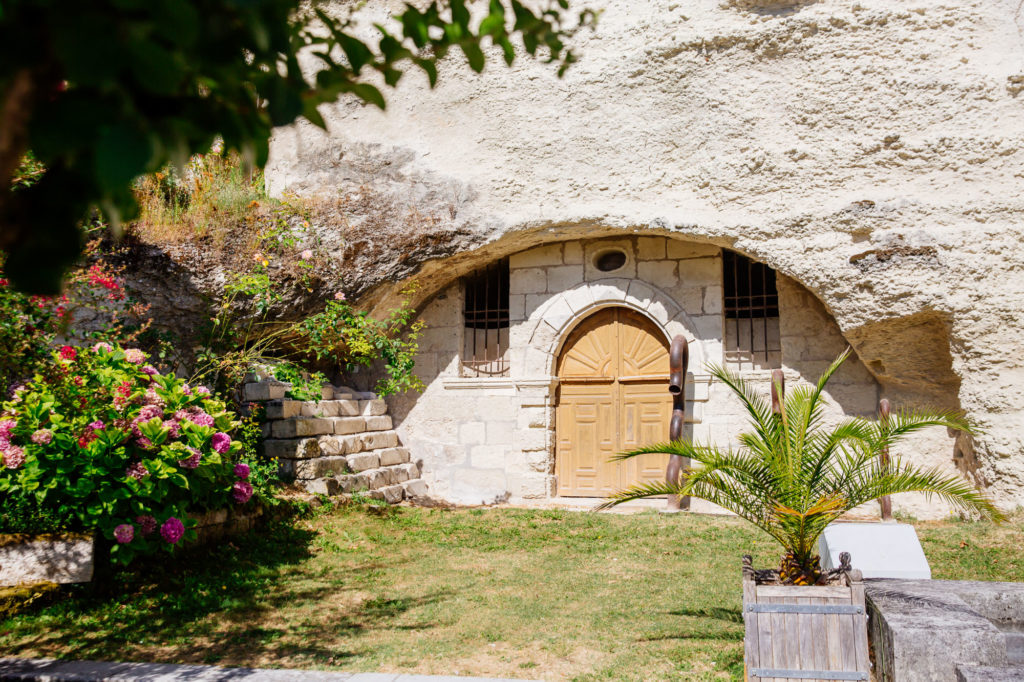 Upon return from the Crusade, its builder was inspired by different top to bottom hollowing out styles he saw in the Capadoccia region of Turkey, which was less dangerous than doing the opposite.

Aubeterre’s underground church, the largest cave religious building in Europe, remains one of the few such sanctuaries that can be visited in France, along with the one in Saint-Émilion, 60 km away, which was commissioned by the same man.

This church is exceptional because of the amount of rock excavated from it (9000 m²). It was built as a single project over a period of about twenty years.

It has no equivalent in size, in France or in Western Europe.

As you enter the immense limestone cavity through the wooden door, you’ll be struck by its unusual architecture. The great hall is supported by two octagonal monolithic pillars, which will immediately catch your eye because of their size. The vaults cut into the rock are almost 20 metres high!

Take a tour of an impressive monolithic reliquary.

The most beautiful feature is most certainly the hexagonal reliquary in the centre of the apse. This two-storey stone sculpture, inspired by the Holy Sepulchre in Jerusalem, is carved from a single block and is six metres high! You’ll feel tiny next to it!

There is a cavity, decorated with a Greek cross, aligned with it. Is this a relic pit for the cross brought back by Castillon, or is it a baptismal fountain? The two ideas are hotly debated.

Look from above (from the circular gallery).

The church is flanked on three sides by a circular gallery which can be reached by climbing the carved, limestone 80 steps.
It affords an astonishing view of the entire cavern, 18 metres above ground. The opposite wall, which is one and a half metres thick, is pierced by three large windows that bathe the sanctuary in direct light.

This light from the sky contributes to its ethereal atmosphere.

Visit the necropolis and the 170 rock tombs

The opening cut into the rock gives way to a striking area, where the floor is hollowed out with around 100 tombs, all testifying to the sacred importance of this site.
A vast 9th century necropolis with 170 graves and 80 medieval sarcophagi stretches before you. Unlike a traditional cemetery, where soil is removed to bury the dead, sarcophagi were placed on the ground and then covered with soil. Nobles were placed in enfeus (burial niches in the wall) in the entrance hall.

Descend into the crypt

The crypt, dug under the building’s core, was probably reserved for canons. It has a 17-metre-long corridor decorated with arcades that lead to its core. In the apse, there is a small altar carved into the stone and two seats carved into the wall. This underground chapel was discovered by accident in 1961. It seems that it was completed following the collapse of the church’s core.

The underground Église d’Aubeterre has seen more and more British and foreign couples choose this fortified village for their wedding. Making it official in this sacred building has become quite chic!

Weddings for foreigners are organised by three British people living in Charente.

Do you fancy exchanging ring in this unusual and extraordinary church?

Request your Pass’ Aubeterre-sur-Dronne/Saint-Émilion and take advantage of a reduced price when visiting one of the two underground churches!

The biggest underground churches in Europe are in Nouvelle-Aquitaine!
Aubeterre-sur-Dronne: one of the Plus Beaux Villages de France, ‘Station Verte’, and ‘Petite Cité de Caractère’ will charm you with its authenticity and laid-back lifestyle. Hidden away in this small town is the impressive and cavernous underground church of Saint-Jean, with the most incredible of dimensions: 20 metres high! Its reliquary, necropolis with more than 160 sarcophagi and the breathtaking gallery that can be accessed from 18 metres above ground make for the most extraordinary of sites in Europe. 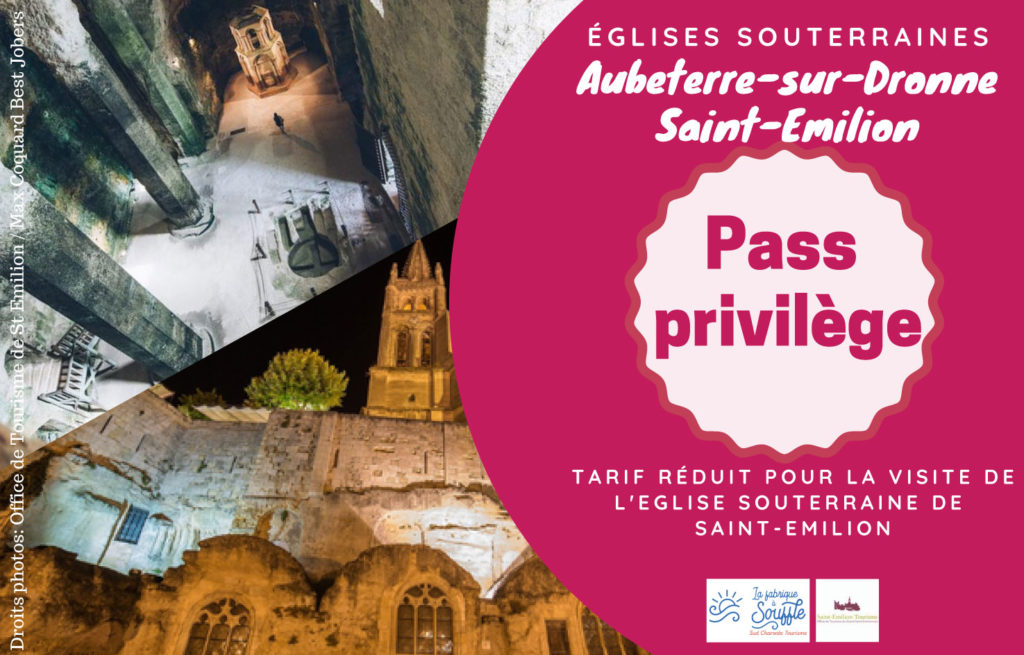 Just one hour from Aubeterre-sur-Dronne, you’ll find another charming medieval town: Saint-Émilion. World famous for its wines and the first vineyard to be listed as a World Heritage Site by UNESCO in 1999, this small village is home to many historical treasures, including the extraordinary monolithic church. Carved at the beginning of the 12th century, at the request of Pierre de Castillon (Viscount of Aubeterre), its dimensions are equally spectacular: Thirty-eight metres long and 12 metres high!

How does it work?